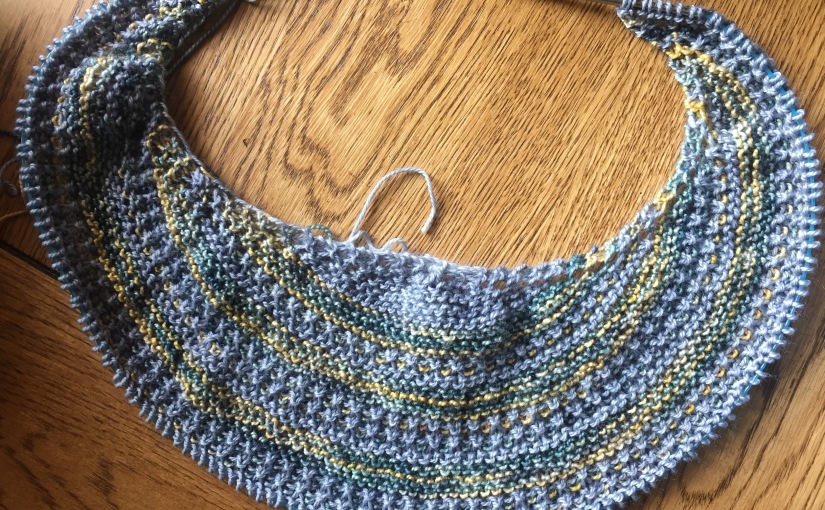 Pretty much everything in the last 8 weeks has been building in one way or another toward the WI Sheep & Wool event. Sure, I finished my handspun socks and did a few other bits and bobs along the way (like the random morning I decided to re-caulk the upstairs tub… but that’s a story for another day), but by and large the focus was on being ready for WI Sheep & Wool. Did I have enough handspun? Did I have the right spindles? Was my spinning wheel clean? Did I have the right fiber to demonstrate with? Did I have the weekend planned well enough that the kids would have fun? Was my mom all set with a plan that would make her happy? Did I have yarn to cast-on our group project? And on and on. Don’t get me wrong, these are not complaints at all, it’s just been the state of my brain, like an on-going mildly urgent checklist.

Now that we’re on the other side of it though, I’m a bit more relaxed and relaxing into our normal routine. I finally got the old, dead freezer out of the garage this morning. We’re on our full-day homeschool schedule and I’ve got all our records and tracking set-up and up-to-date. We’re planning and cooking normal meals again. Moose is getting all his necessary beauty rest with minimal interruption. It’s all good and I’m feeling more settled than I’ve felt in months.

It seems only fitting that I take stock of where I’m at with some projects and share them here. Partly because I like to keep everyone apprised of where I’m at, but also because it gives me a little bit of accountability that never hurts when it comes to achieving self-set goals. This is especially true when you’ve just added a bunch of new fiber and yarn to the stash as I have and you’d like to start chipping away at those projects that have been on your radar for a good long while now. So let’s have at it, shall we?

First, there is my very first Hitchhiker. 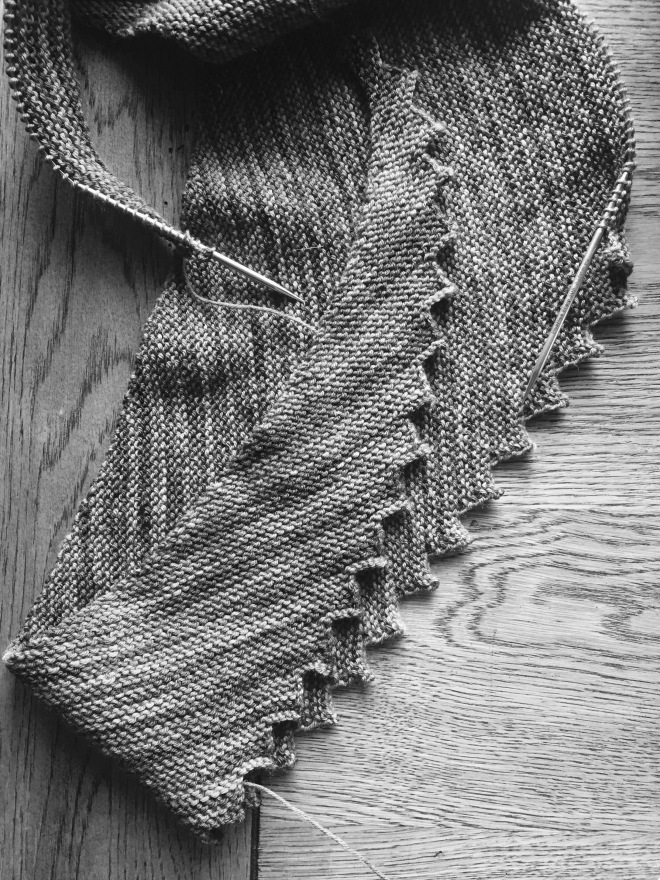 I’m photographing in black and white because it’s a test color that I’m trying out. I reached the point of total addiction to this potato chip knit and I have the feeling it’ll be off the needles by the end of the week just because of the sheer joy of knitting with the colors and design. It doesn’t hurt that it’s been a while since I’ve been able to knit unabashedly without a spinning deadline looming.

Next up, I have a plying project that I’d hoped to finish before WI Sheep & Wool, but I just ran out of time. I started it upon my return instead.

I bought this years ago, during the first Sock with Sarah KAL. It’s a Blue Moon Fiber Arts Sheep  2 Shoe kit. There is only one such kit available in their online shop currently. I’m thinking maybe it’s been replaced by the Super Foot! Roving as it appears to be similar. In any case, it’s sat in my stash literally for years and since I really didn’t have interest in spinning it for socks and I’ve been on a crusade to clear through and/or destash all the seasoned fiber and yarn around here, I just spun this monster 8.5oz kit onto 2 bobbins…

And I’m making a simlple 2-ply. I’m not breaking any speed records with this plying job, but I’ll get through it eventually. I’ve got another special spinning project ordered, so I’m just aiming to finish up by the time the new project arrives.

This is the rest of my deep stash spin-off…

Housed in my awesome copper boiler that I picked up a couple weeks ago at a flea market. There are more than a few projects in here, but the plan is to just keep whipping through them and then maybe have a little handspun destash party later this fall.

The ladies in our get-together decided to cast-on a Rainbow Warrior to commemorate the special weekend. I did…

And I just was not feeling these colors. When I got a few repeats in and noticed a major mistake, I took it as a sign, ripped and back, and picked new colors. 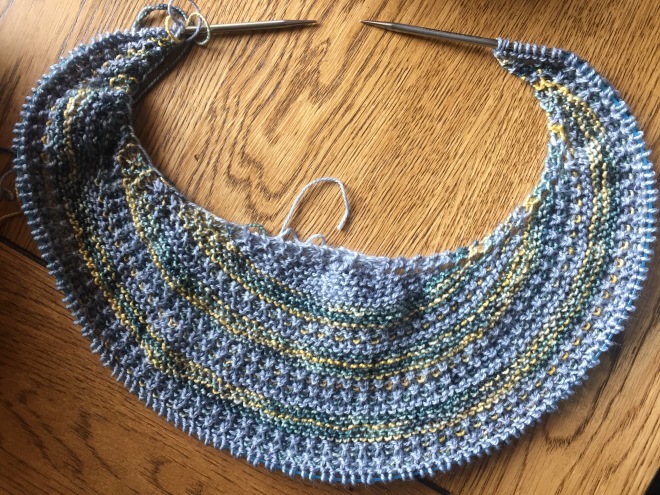 This is a skein I got at the festival — King of the North on Merino + silk from Bumblebee Acres — plus a skein of Tough Love Sock from Sweet Georgia in Silver that I had stashed. It’s a little more Green Bay Packer than I’d anticipated, but I love the gold and silver tones together. I’ve been back and forth a couple times on whether or not to switch out the colors again, but at least for now I’m going to hang with it as is.

This is my last shared image (I think) of my Dyeabolical Gradient Clever Girl toe-up socks.

I’m just hitting the second color on the first sock. I’m at that point where I’ve past the heel and there are just miles of stockinette in front of me. I’ll just say that it’s a blessing and a curse in my eyes. I’ve got a ways to go here.

Also started long ago and hibernating since around the time we moved is my Find Your Fade shawl.

I stalled out around the time I stopped increasing with it. And then I accidentally knocked some stitches of the needles. Suffice to say, I need to sort it out and just finish it up one of these days. It’s a lot of knitting, but it’s going to be awfully pretty when I finish.

I almost forgot that I have this second sock waiting to be finished up, too, from my test knit of the Three Waters Farm Storm’s End colorway on 75/25 merino + nylon.

I really need to get it done so I can start wearing them. I’ve been wearing my Three Waters Farm Mini-Skein kit socks constantly and I love them to pieces. It’s time to get these off the needles, too!

If this wasn’t enough — and I mean, really, it so is enough! — I have at least 3 colorwork projects on my short list. They are small and quick and colorwork which I always speed through, but there are some deadlines on these so I need to really make this happen sooner than later. This combination is the one I’m most excited about…

With any luck and/or planning, these will be knit up into a gift. Cross your fingers for me, everyone! I would like to not cast-on until I finish up one or two of the already in-progress projects here, but time may get the better of me on that front!

What does your WIP pile look like these days? Honestly, this is more extensive than I thought it would be — whoops! I hope yours is perhaps a bit more contained, or at least more well thought out. I suppose it’s time for me to stop typing and start clicking away! I think I’ll begin with a simple goal: One project off the needles or wheel by Sunday evening. That sounds reasonable, doesn’t it? 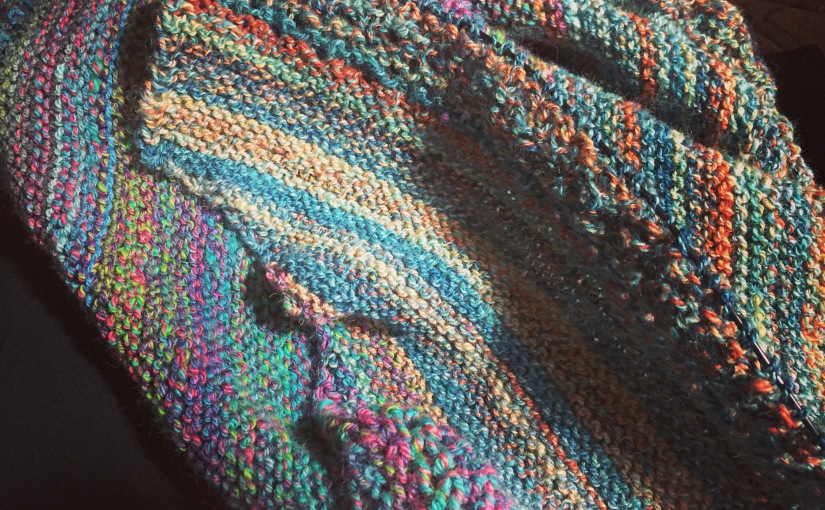 Find Your Fade section 8. For the third time.