It’s true, the Tour de Fleece started last Saturday and while I failed to manage to get a pre-Tour post together of my goals, I am spinning away these days and trying my best to keep up with my amazing teammates on Team Three Waters Farm. It’s such an inspiring team and I’m so humbled to be in their numbers!

In any case, I thought that before I started sharing what I’m currently spinning, it might be a good idea to clear the decks and share what I actually managed to finish before the Tour de Fleece started. You see, I went on a bit of a spinning tear just before the tour started. It began with a push to empty bobbins by finishing up two longer standing WIPs and then morphed into digging into my stash of “other” preps.  A couple quick “freestyle supported long draw” spins happened and then a day of finishing. And these are the fruits of those labors!

First, I have a very special spin to share.

This skein is Three Waters Farm’s Giant Celosia on a 60/40 Polwarth/Tussah Silk base and the singles were entirely spindle spun. It took me just a couple weeks less than a full year to complete start to finish. I tried something new this time. Using the bobbin winder and weaving bobbins I got for my loom, as I filled spindles I would occasionally wind them off onto weaving bobbins. When I came to the end of my singles, this made it easy as pie to pop them on my AkerKate and ply with my wheel. I will definitely be doing this again as I found it super motivating!

Next, another special skein. My first ever skein with my Jensen Tina 2.

These were the two spins I needed to finish up to clear off my bobbins and knowing I only have a few days and feeling an urge to flex those freestyle supported long draw muscles again, I went to my stash…

And found these 4oz of rolags in the Cape Cod colorway from Bumblebee Acres. Because of how these rolags are rolled with varying bands of fibers as you spin them, I find a pretty “freestyle” supported long draw to work nicely. 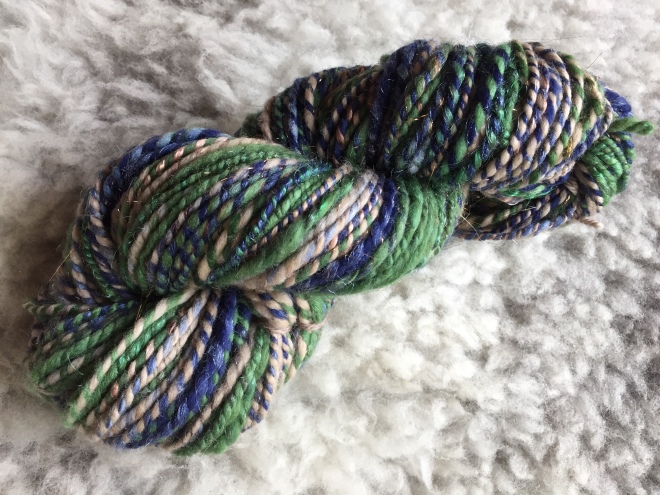 I have to admit that I really enjoy this type of spinning and the resulting yarns I can create with it.

It doesn’t have as much spring as an unsupported long draw, but it’s still got a lot of energy & life in it.

And I had enough time before the TdF kick-off for one more spin, so I went to my stash and found 2 – 4oz batts in the Inspired colorway from Classy Squid Fiber Co. They went from this…

I’d originally bought the batts with the intention of spinning like colors together in a big gradient, but when I started spinning for no real reason I just felt like jumbling all the colors together.

So I did and I love the results. It’s squishy and colorful and just fun. When I came to the end of the bobbin, I found that the first bit of spinning was a little lighter than the rest and it was also entirely yellow and orange. Rather than have a weird monotone section on the skein, I broke it into two mini-skeins…

I don’t really have a plan for this set…

But I’m sure I’ll think of something.

And with this beautiful round of stash enhancement tucked away and shared with you, it’s time to get back to my current WIPs. There may just be 20oz of fiber already in progress… more on that soon!