Sometimes you come to the end of a week and you just kind of stare and take a big, deep breath.

At our house, the last couple weeks we’ve had a minor switch in our schedule and even though it’s not a big deal, it changes the rhythm of things and it’s an adjustment. During the week we’ve all felt a little discombobulated, kind of like when your sleep patterns are all off when Daylight Savings happens. Everyone still functions, but the timing of everything feels just a tiny bit off.

Beyond the schedule change, we haven’t had any increase in appointments that had to be kept or anything. I certainly am not as on-the-go as many parents out there, but there was a lot of… content (for lack of a better word) crammed into this past week. We started with a day trip to the Milwaukee Public Museum. They have a new traveling exhibit called Ultimate Dinosaurs that arrived earlier this month and we had to check it out as we all dig dinosaurs (see what I did there? sorry, I couldn’t resist), especially our son.

We arrived early and had a little time to burn before our movie & the exhibit, so we hopped up to the butterfly vivarium and the adjacent insect area first. As luck would have it, a young man was cleaning and feeding the insects. The kids LOVE the insects. When the kids walked up to him at the tank filled with white-eyed assassian bugs and inquired as to what he was doing, he very kindly explained his process, a little about the bugs, and then the kids got to watch him feed them.

I was as mesmerized as the kids — it was incredible! And let me just say, the bugs are appropriately named! Wowza!

The traveling exhibit was pretty awesome, too. 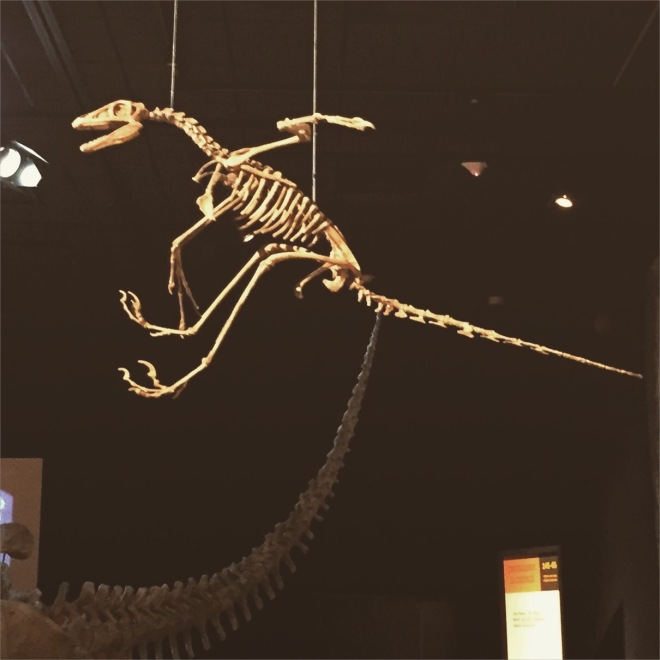 This was my favorite dino from the exhibit — a Rahonavis which was a bird-like theropod from Madagascar. I just love how he’s posed. He looks kind of like he’s boing-ing along like Tigger from Winnie the Pooh, doesn’t he?

The kids especially loved the big kahuna of the exhibit, the Giganotosaurus…

Partly because he was so huge, but also because they had these cool screens you could aim at the fossils and ‘flesh it out.’ There were tons of great interactives, but this was by far the most impressive.

That was the flashy part of the week.

The rest of the week’s ‘content’ has involved some old parenting stand-bys like how to have patience & kindness with each other, especially in the classes I run with both kids working alongside each other. There’s also been a lot of talk regarding cleaning & responsibility and teaching the kids how to do more chores independently. This is everyone’s favorite, right? Part of a bigger educational arc that includes personal finance, budgeting, and taking care of one’s things, the kids’ room was in a desperate state so each day we’ve been tackling a new area. I opted to start this ‘life lesson’ with the kiddos by being an example. Shifting the majority of my knitting & spinning library downstairs isn’t really what I’d prefer, but in the larger sense it made sense to free up more space for their school books.

And in exchange I adopted their old, smallish bookcase for my spinning tools. I don’t know why I didn’t think of it earlier as now I’ve got all my spinning tools within arm’s reach of my wheel. It’s excellent for me and a much better fit for the kids, so it’s definitely a win-win. 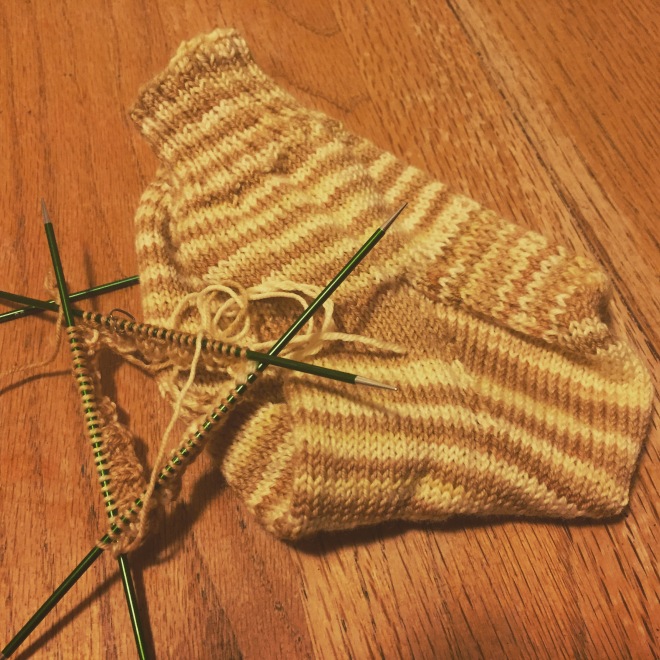 I’ve been working on a pair of socks for my mother-in-law. A bit too long ago I promised her some socks and I’m finally getting around to making good on that promise. These are a prototype — she lives in a warmer climate, so I’m experimenting with a much shorter leg & cuff. I’m hoping to finish them up within the next few days and then send them off to her to see how she likes them. Once I know if the fit works for her, I’ll break out the other skeins I have set aside for her.

I’ve also been squeezing in some time for spinning…

I finished spinning the singles of my Three Waters Farm Top of the Month Club fiber “Light in the Trees’ on Polwarth last night. I had meant to leave my wheel untouched this week as I prep for the March 1st launch of the ‘Unexpected Combos SAL’ in the TWF Ravelry group (for which I’ll be spinning my 1+1+1 spinning project for this quarter), but on a whim I just jumped on this lone braid of fiber. I saw a fellow spinner’s version of this colorway and I just couldn’t wait. Thankfully, I should be able to get it plied before the 1st and as a bonus, I seem to have gotten my lightweight spinning skills back on this spin. That bodes exceptionally well for my plans for my upcoming spin, so I’m very happy I took this little leap.

I also noticed yesterday that poor Moose had a couple raw spots on one of his paws. I’m guessing it was brought on by homeowners having to salt sidewalks more with the fluctuating temps melting and refreezing snow & water. I cleaned and wrapped his foot yesterday just to get it on the road to healing and to keep poor Moose from licking it. And I was reminded that bandages instantly turn Moose into big baby. He follows me around and sits on top of me whenever possible when he has to wear one.

Yesterday that included smooshing himself in between my spinning seat & my wheel. As you can see, his girth kind of overflows on to my treadles. That doesn’t phase him. My fiber sometimes falls on his head. That doesn’t phase him. So long as he’s right there with me, that’s all that matters. Thankfully, he hasn’t touched him foot today and it’s looking much better so I’ve been able to leave the bandage off so far.

On a completely different and somewhat random note, I’ve been in touch with a really lovely woman at Craftsy regarding some future reviewing and even though it’ll be a little bit before I get there, she let me know that they’re having a HUGE Winter Clearance Sale this weekend — Friday thru Monday to be exact — on select yarn & knitting project kits. And she extended this link that will give you an extra 20% off existing clearance yarn prices. Oh, and then there are the requisite oooh & ahhh photos. 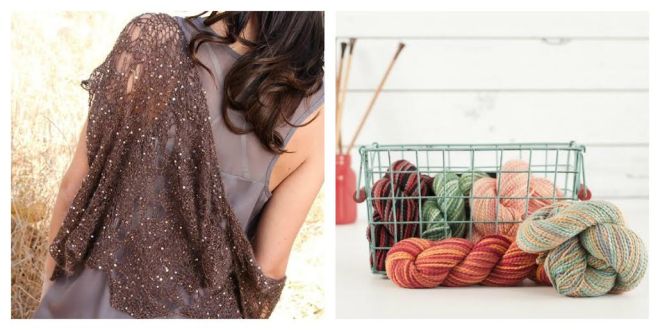 I’ve really enjoyed the Craftsy classes I’ve taken. With my busy schedule, they have been a godsend for learning new techniques. Their kits are pretty sweet, too, so definitely check it out!

So that’s been my random, busy, full week. Today we’ll be tackling some Lego overflow and maybe start to figure out how to clean the kiddos’ closet. I’ve also got some bathroom cleaning training scheduled for my son. I’ll no doubt be cleaning and dressing Moose’s paw just to be on the safe side. And I need to cast-on a new yarn for which I’ve finally settled on a pattern as well as ply that single I just finished spinning. These weeks, they aren’t often glamorous, but they are always full. And that, well, that’s just the glorious stuff of life, isn’t it?