How is it March already?!

It was another whirlwind of a week last week here. The end of the month is always a flurry of behind-the-scenes activity as there is always something winding down and something new launching. This month, Mary Ann at Three Waters Farm & I announced our intentions to focus on spinning singles yarns with the Three Waters Farm Ravelry Group and over on We Make Yarn on Instagram. There were some great articles on singles yarn in the latest Spin-Off Magazine and we were just inspired to get the community talking and working with them. For all you spinners out there, we’re kicking off our month of singles with a giveaway over on @wemakeyarn on Instagram, so be sure to check it out and enter to win before tomorrow when we will be drawing winners!

Truth be told, I’ve been totally into singles spinning lately. Partly because I knew this -along was coming, of course, but even moreso because it’s taken me a long time to really get a feel for singles yarns and now that I have that feel, I’m really just in a groove with making them. 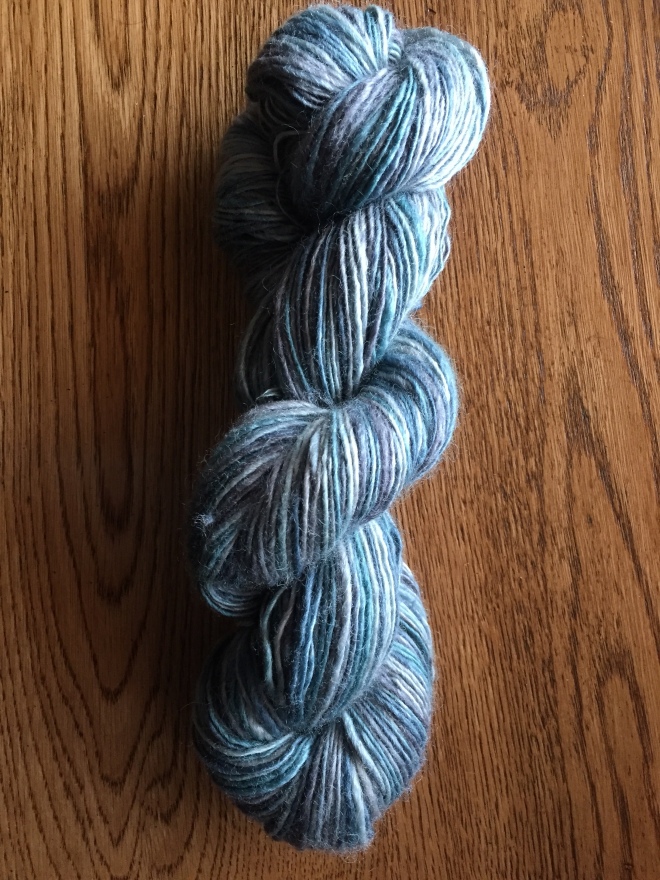 I don’t know what to tell you except that it’s seriously one of my favorite yarns I’ve ever made. 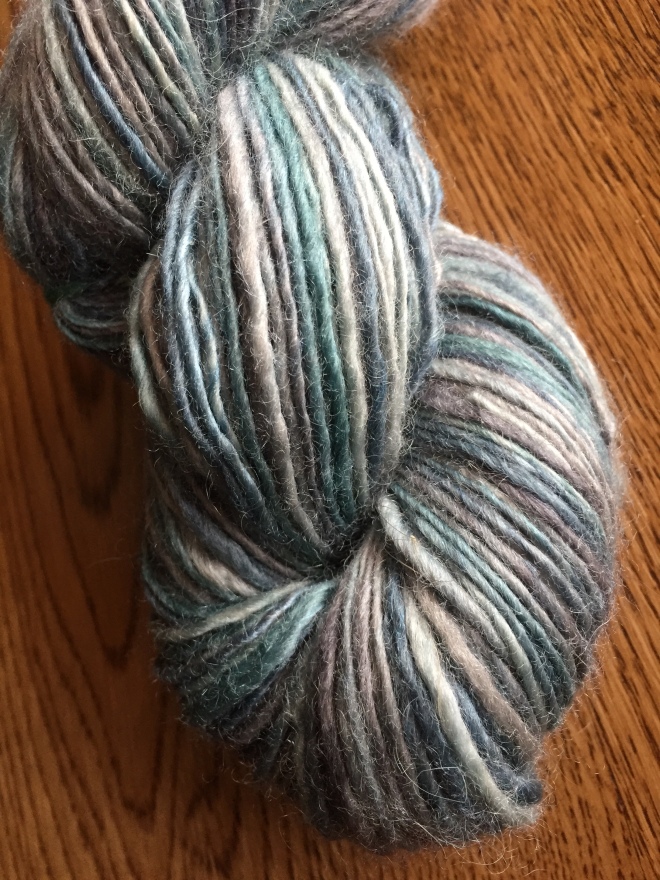 It’s not technically perfect by any measure, but it’s just… it’s got something about that I am in love with. It’s just the right combination of low twist and these cool, blue-grey colors that I adore.

I also whipped up this awesome skein…

The light is catching it a little weirdly in this photo, but in any case, it is called Quilter’s Magic on Rambouillet and it is also from Three Waters Farm. 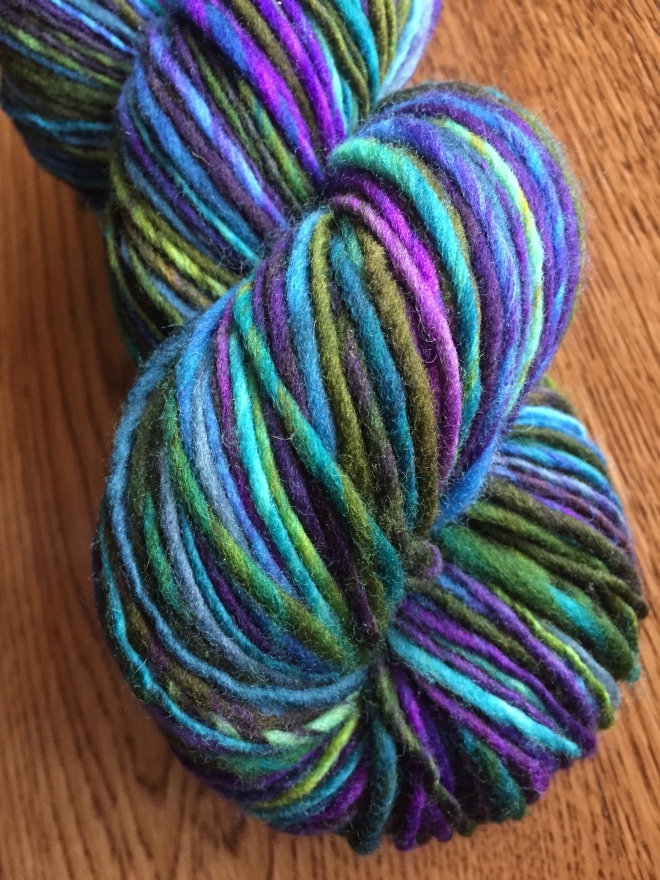 These singles… I swear, I think I’m really getting the hang of them! It’s been really fun to explore the ins and outs of singles spinning, to get a feel for how much twist I need, how to achieve the weight I want, how to not sweat the minor inconsistencies — the whole everything that goes into not just creating these yarns, but really enjoying creating these yarns.

I regret to inform you that I do not currently have details on either of these skeins yet. After getting them spun, I got them washed and dried and then things took a slight turn as I volunteered to cook dinner for one of my husband’s co-worker’s last week who had a birthday and, of course, two more people were invited along for a little mini dinner party. I was totally happy to do it, but for a day there things kind of stood still while I pulled it all together. It was great — learned how to make a new kind of roast, a new way to cook carrots, and found a yummy from scratch chocolate cake and frosting recipe.

While I took a mostly supervisory role in the cake baking as my baking daughter went at it, I was hanging around as she was putting on the finishing touches with the frosting. I turned to say something to my son who was emptying the dishwasher when I heard “Whoa whoa WHOA! [THUD] Oh no!!!”

The two layer frosted cake had hit the floor with the most spectacular THUD I have ever heard. The three of us stood there staring at it, mouths agape, for what felt like a long time. A really long time. Tears began to stream down my girl’s cheeks. I quickly assessed to see if any part could be salvaged, but it was so moist and hit with such an amazing splat that the impact basically annihilated the top layer and put a unrecoverable crack in the bottom layer. There was no possible way to pick it up without it disintegrating in my hands. It was a goner.

It was 3pm. I needed about 15minutes to prep the roast and 2 hours for it to be in the oven (at 100degrees coolor than I needed for baking a cake) and had company arriving by 6pm. A new cake would take 30minutes in the oven plus whatever time it would take to mix it up. I looked at my girl and told her that if we moved quickly and got it in oven in the next 10 minutes we could make a second cake and have it done in time. It was a total and complete whirlwind as we did our greatest Great British Baking Show-style baking to date, but…

We made it, just in time, and it was delicious. In fact, there’s a good chance I am ruined for all other chocolate cake forever now.

That’s the long story as to why the yarn measurements did not happen yet. I could have waited an extra couple days to share them with you, but I did want to share the giveaway in time. I will, however, get that yarn info up on each of their pages on Ravelry when I get there and if you have specific questions, please feel free to ask away.

Cake and dinner party behind us, I did start another singles yarn…

This is Cold Sunny Morning on Merino/Superwash Merino/Tussah Silk 40/40/20 from Three Waters Farm. It’s not one I’d planned to spin as singles, but I wanted to spin the blend as a single and hadn’t tried it yet and this was a braid I’d gotten in a destash, so I felt brave enough to give it a go.

Having been acquired via a destash, it was a little compressed, so I did some pre-drafting just to make my life easier. This is what remains to be spun up…

The little time investment in pre-drafting really makes the singles spin super easily. I’m a little unsure how I’ll feel about this one as a finished yarn. I have a feeling I should have maybe gone for shorter color repeats, but well, time will tell.

And with that, it’s time for me to get back at it! I hope if you’re a spinner, you’ll consider doing some experimenting with singles along with me and the rest of the community this month. I’m open for questions and advice should you need any!

22 thoughts on “In Celebration of Singles”