As many of you know, toward the end of 2016 I bought a loom. It’s a 28″ Ashford Knitters loom and as soon as I got it, I took to it right away. My main interest is in pretty simple weaving — scarves and wraps with my handspun is primarily what I intend to use it for and I love the size and versatility of this loom. I had it just a few months when we found out we’d be moving and thus, as it was the craft with which I was least familiar and thus required the most time and focus, it really fell to the wayside before, during, and after the move. When life is in an upheaval, you need to stick to the basics until the world settles back down, you know?

And so my loom has sat in my living room since we moved in last April. It’s sat in plain view in the living room, empty and unused. How sad, right?! Aside from just not having the time or capacity to really dig back in to the learning process with it, I had a bigger problem to solve. Despite gaining space in the move, I lost what in retrospect was a wonderfully convenient and well-situated warping space. Since the Knitters Loom is a rigid heddle and thus easy to direct warp, I didn’t have a warping board because with the space I had in the basement with my sewing table, I just didn’t need it. A warping board seemed like excess for such a small loom that is easy to direct warp. As the months went on though, it became clear that there was no way around it. I really did not have a large enough space that’s also out of the way for warping. I knew I had to do some investigating and figure something new out for the new house.

Alas, at the end of last year and beginning of this one, I acquired fiber and started spinning for two weaving projects. I know myself well enough to understand that if I spun the yarn, I’d force myself to figure out the loom situation. Sure enough, at the end of last week, I finished spinning the last of said yarn and shortly after getting it washed, set, and hanging to dry, I started looking for the warping answers I’d need to proceed. I hopped over to Liz Gipson’s Yarnworker website and started exploring.

I’m new to weaving, but I do know that Liz Gipson is kind of the queen of rigid heddle looms. I poked around her site and couldn’t figure out if one of her DVDs or her Weaving 101 online class would get me the info I needed, so I did what I do — I shot her a quick email asking her recommendation. She very kindly responded with a link to this free-with-registration weave-along from last summer that includes directions for a hybrid warping method that basically direct warps your rigid heddle loom with the use of warping board thus making the warping process much more compact. Exactly what I was looking for! She really is the queen of rigid heddle looms! I popped online and ordered a small warping board that should serve my purpose and some kraft paper to keep the warp in order on the loom (those cardboard sticks that come with the loom are for the birds!). My tools should arrive by the weekend and I’ll be ready to weave!

What project will I start with, you ask? Well, let me show you! 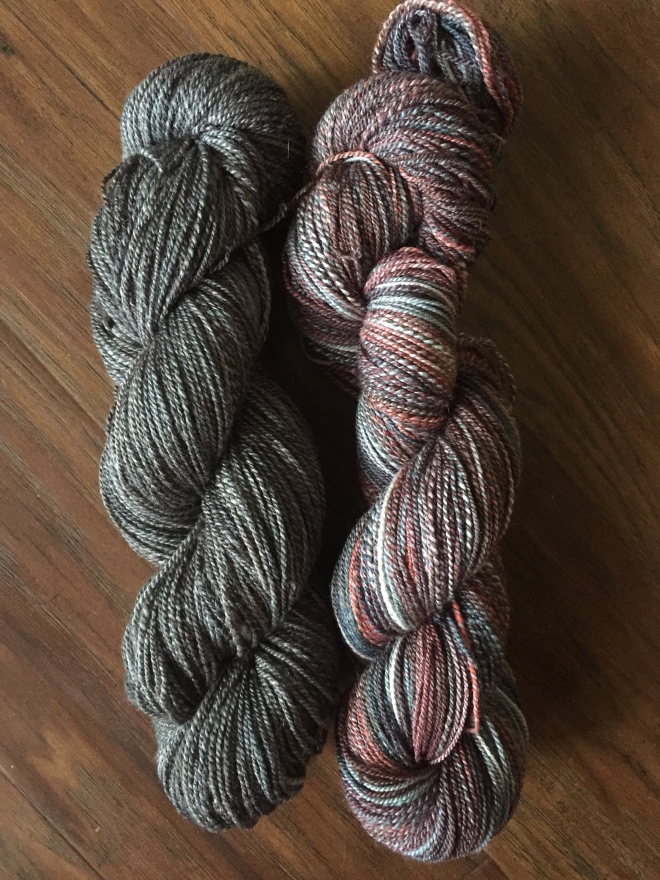 Won’t they be lovely?! 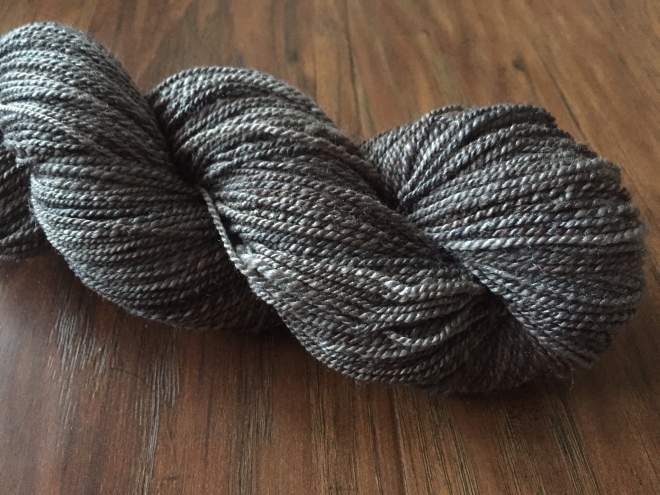 This is my handspun 60/40 Polwarth/Silk from Three Waters Farm in the Granite colorway. It’ll be the warp.

And this is also my handspun, a 40/40/20 blend of Merino/Superwash Merino/Silk also from Three Waters Farm called Moving in Circles. Obviously, this will be the weft. Both are neutral and subtle and absolutely beautiful. I think they’ll be wonderful together.

I’ll admit, right about now I’m feeling pretty smart for using these yarns as an incentive to get my loom situation figured out. Nothing motivates like the promise of a pretty project! I hope to be back soon with updates on how the hybrid warping goes as well as the yarns or the other project for which I’ve got yarn drying. Until then, though. I’ll be gathering the items I need, working out the required math, and waiting in anticipation to begin! 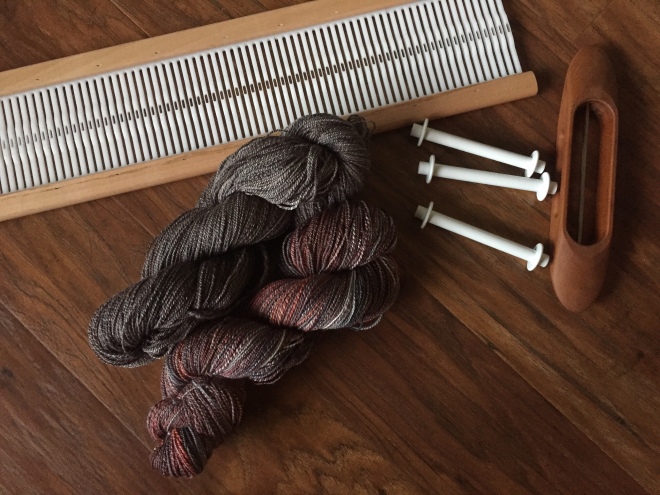