I tend to over plan my crafting. Because my crafting feeds my blogging, I try to have a grand scheme in mind as to my craft timeline so that I have things to write about. After all, this would not be super interesting if I kept showing you the same 4 projects for 6months, would it? That said, there are times that wind up busier than others just because I have a great opportunity to test or review something new-to-me (or new altogether) and I just don’t want to pass it up. I’ll squeeze it in I tell myself. And I do. I always find a way to make it work.

The past month has been one of those times for which the over planning took a backseat to opportunity and I’ve been feeling like I’m constantly trying to get caught back up. Part of that is that things around our house have been busy, but part is because I took on a few extra projects this month. It’s all good, you know, and thankfully solid forward progress is being made on all fronts, both around the house and in my little crafting world. My main concern is that I’m running behind in my 1+1+1 projects for this quarter, but we shall see. When life happens, it happens and sometimes you just have to enjoy random surprise opportunities when they present themselves and the rest will get done when it gets done.

But I digress. Shall we talk about what I’ve been up to this week?

First, as you know I’ve been working on my Briggs & Little Durasport Chittery Chattery Socks.

Last night I finished the first and this morning I cast on sock #2. I’m actually a couple inches farther now as I knit on them through a library sponsored viewing of The Force Awakens with the kiddos. This was my first time knitting through a movie in the dark with a stitch pattern, but it went surprisingly well and the progress has put me in a pretty darn good mood.

Second, the big news around here is that the Akerworks test version of the Flat Pack Lazy Kate arrived earlier this week and it was time to get plying!

As it’s being tested and discussed in the forum & forms put together by Akerworks, I won’t be going into great detail here until the testing phase is complete. 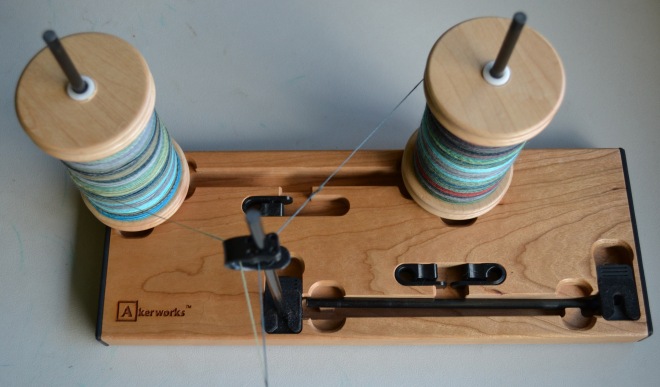 I will say that it’s a pretty ingenious design, especially if you’re a spinner that travels a lot and I’m really enjoying putting it through its paces.

Hey look! I haven’t lost my rings again yet! Or, the real reason I’m re-sharing this photo is the background — those are the 4 skeins I’ve successfully completed for the “AkerKate” test. I’ll give you a more in-depth introduction to those later this week.

I did take a little time not long ago to treat myself to working up some proper yarn bands for my handspun yarn.

Because I’m not very graphics/computer savvy, I worked with this very helpful shop on Etsy to create them. I have no plans to sell my handspun at this time, but it’ll make keeping track of things and gift giving much nicer I think. It’s been something I’ve wanted to pursue for a while and I’m glad I finally got there.

The rest of my spare time when it hasn’t been raining (which it has been a fair bit lately) or snowing (which it was doing this morning) has been spent doing some of this. 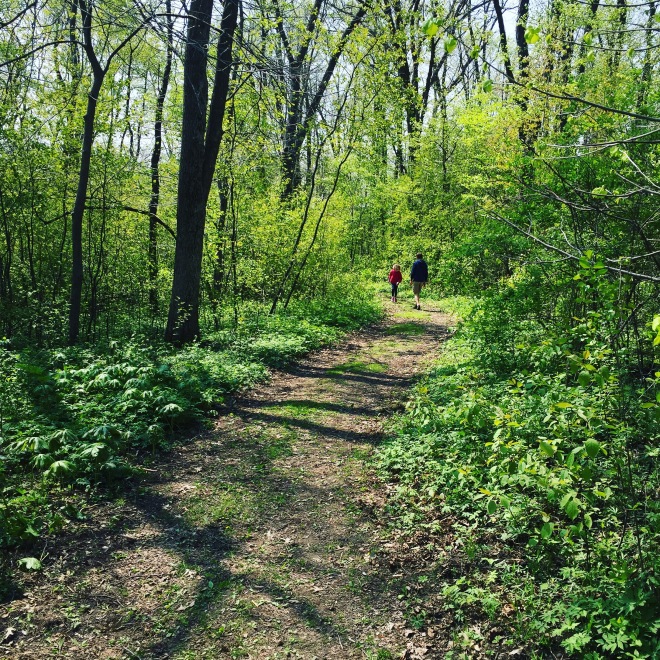 It’s a beautiful time of year (usually) to be hitting the trail complete with new migratory birds in the trees each time. I even saw our first hummingbird of the season yesterday and got our feeders up after a brief stare-down through the front window by a determined female.

And then there was this…

Our sweet Moose needed some extra snuggles this week. At his annual trip to the vet in which his seasonal allergies were kicking up a storm, we decided to try a new medication for him. And he had an allergic reaction to it! To add insult to injury, his ear that is borderline infected flared up, too. There’s been a lot of sad puppy ear cleanings and other less than awesome treatments this week, so I’ve been taking extra time to try to make sure he knows I love him dearly and I ‘m really and truly not trying to torture him with apple cider vinegar and ham that tastes suspiciously like pills.

Well friends, I’ve got pizzas to make and laundry to sort. And the lawn probably needs mowing. And Moose needs some snuggling. And I’ve got four projects left to ply and those socks aren’t going to knit themselves. It’s time to get back to it! Just keep knitting & spinning & all the rest and it’ll all get done eventually, right?!

6 thoughts on “Just Keep Knitting & Spinning & All the Rest”