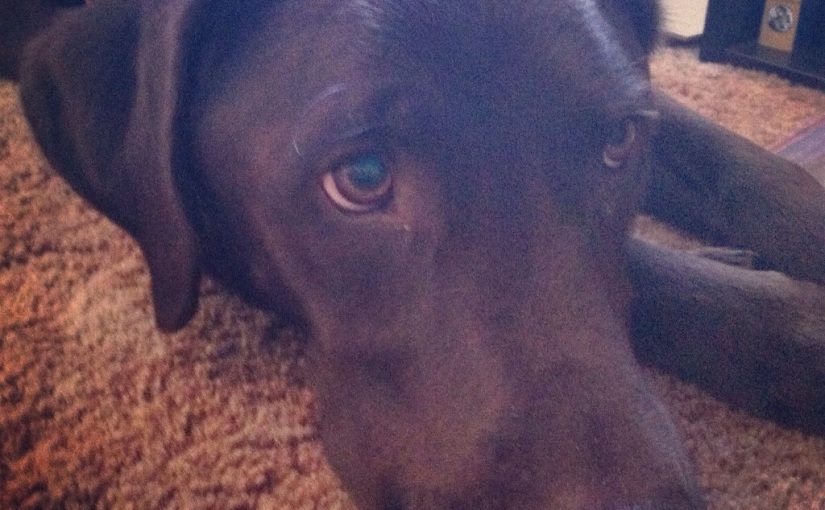 Today I thought I’d share a little bit about my favorite knitting buddy, our dog Moose. He is the third dog we’ve had at our house and he’s extra special to me. Our first dog was our beloved Shepherd-Akita mix who passed away from age & illness a number of years back. The second was a pup we rescued from a local shelter whose food aggression proved too much for our house even after multiple training classes to try to make it work. When we surrendered him I was broken-hearted. He was only my second dog and after countless hours of training it had ended with him snarling and attacking me in my own kitchen. I was left very afraid of dogs and convinced I would not have another one again.

Once a couple years had passed my husband — who is very much a dog person — started to drop hints about finding a new dog. We did a little looking and met a couple dogs, but I was woefully uncomfortable and just couldn’t do it. At right at about this time my hubby mentioned our early searches to his then co-worker. She happened to have a sister who had a small farm and she was selling the last of a litter of Labrador Retrievers. We drove a couple hours south of our house to meet the last little male pup available. On the way husband was convinced we’re be bringing him home. I was convinced we were not.

And then this rolly-polly little brown pup waddled out of the house. 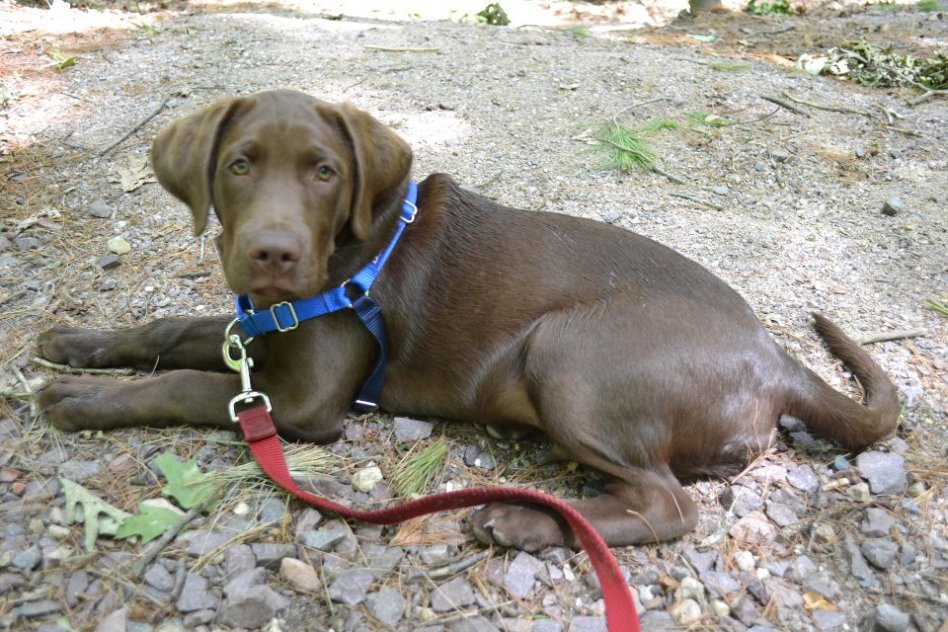 I was insistent though that we observe him and interact with him and put him through all the puppy personality paces we’d researched so we would have a pretty good idea of his personality so we’d be as sure as possible that we were a good fit for each other. It didn’t take too long to convince me that he was pretty much perfect for us. He slept on our laps the whole way home — dead weight from all the excitement. And ever since, he’s been my constant companion.

He helps me do laundry.

He helps me spin.

He helps me exercise.

He even shares my lukewarm enthusiasm for mornings.

He is the sweetest, kindest soul out there and he’s is never more than a few feet away. On most of our adventures he rides along whether he gets to hike or not. We’ve found that if the weather is cool enough, regardless of what we’re doing he much prefers to ride along in the car and wait for us than to have to stay home.

It was in his first year that we had our first indication that Moose Burger (oh yes, his middle name is ‘Burger’, of course) might have some allergy issues and his allergies are the main reason I wanted to write about him today. We’ve since learned allergy problems quite common in labs and I always get a ton of comments on Instagram when I mention our struggles, so I thought it’d be worthwhile to share a bit here. The first couple times we were able to manage his outbreaks it just by switching up food for him, but the last encounter has been a bit more to overcome. It’s always hard to know if it’s a food allergen or environmental that is triggering the problem, but this time around he was having distress in the dead of winter so food was a safe bet. In any case, he went through three rounds of antibiotics combined with weekly baths using prescription shampoo before we were able to clear up his skin infection.

On the bright side, he and I have perfected his taking pills. He also has learned to love baths. At first they terrified him and my getting this 80lb dog in the tub should have been filmed for some sort of blooper reel, but then we discovered the healing powers of Elvis. Yes, every time my pup gets a bath, I sing ‘I’ve got a brown Moose Burger in the bathtub’ to the tune of Elvis’ ‘Blue Christmas’ on repeat for about 15minutes. Sometimes I switch up the words in the made-up verses and usually he chimes in with me for a little while. Instead of a chore, it’s kind of a special time now and he wags his tail happily through his bathtime.

The other element of Moose’s treatment is that he’s on a food trial to try to weed out problem ingredients. Currently he’s still rocking the pumpkin-pinto bean-ham diet and so far it seems good. Eventually we will broaden the scope in order to add in some of the more unique vitamins and minerals, but for now we are just trying to find a good spot from which to start challenging his diet a bit. As you can imagine though, it’s added work for me — every few days this happens in my kitchen…

I cook up a giant pot of pinto-beans and measure and combine ingredients. Sometimes I don’t bother to combine it all right away, but if I have the time and space in the fridge it saves a little time to throw together a couple days worth of meals all at once. Now you might remember, I mentioned Moose is in the 80lb range so each meal is a full four cups of food — sometimes I add extra ham or beans if he’s very active — and he eats twice per day. You can imagine what going to the store to stock up for him for a a few weeks looks like. As I load 60cans of pumpkin, 20lbs of beans, and a bunch of ham into your cart, my cart goes from empty to overflowing in about 5minutes and it always raises a lot of eyebrows and elicits random comments. And everyone’s eyes get huge as I try to turn corners with my 20tons of random canned and dry goods. As my poor car groans and lurches forward under the weight of it all, I look over and see this face…

And it’s all worth it as my heart melts all over again, just like it does every time I see him.

There’s a part of me that recognizes that this is a little insane. I didn’t really know that a dog could be this high maintenance, at least not a young dog, and it is a lot of extra effort and constant diligence to be cooking for him and bathing him and checking him over daily for any signs of reaction. The bottom line, though is that he’s my best friend and it’s pretty easy to admit that I’d do almost anything for him because…

Quite frankly, I don’t know what I’d do without him.

19 thoughts on “Singing Elvis to My Dog”