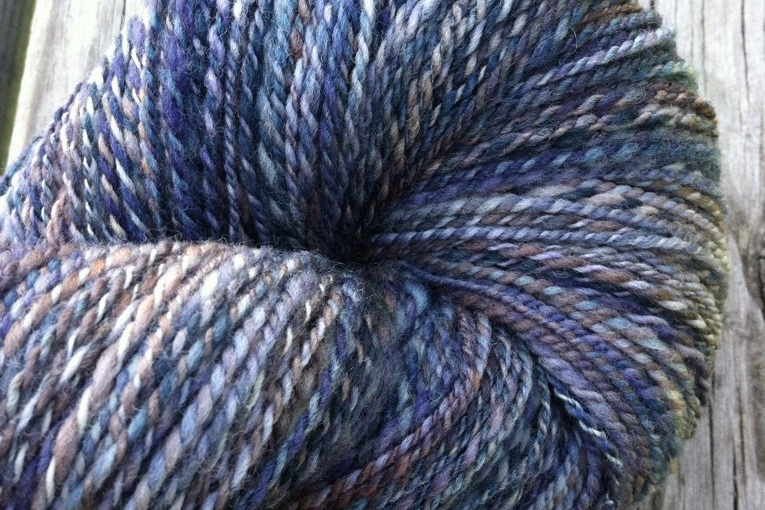 A couple days ago I wrote about how excited I was to spin up my latest Cloudlover fiber club fiber as soon as I received it. I am a blue addict and aside from my family, there isn’t much I love more than the beach. As you can imagine the ‘Lakefront’ colorway definitely struck a cord with me.

I am not always the best at putting two and two together and getting, you know, four. I’m mildly embarrassed to admit that while I do have a fair amount of skills, sometimes the obvious really eludes me. One example is how long it’s taken me to learn that those white patches won’t actually be white when I spin up this wool. No, it’ll actually saturate the colors on either side of it – so the deep brown with a hint a yellow will work with the the white and spin up sandy. The dusty navy  bordered by a inch or so of white will be slate. For someone who has had art classes, who made a college career of studying the history of art, this epiphany was pretty long overdue. Better late than never, though, I suppose.

Anyhoo, I did get right to it and in no time flat I had finished spinning singles out of half the fiber.

No big white patches, either. Just the perfect little lakefront-esque hues — Natalie at Cloudlover Yarn & Fiber is such a color genius.

And I finished up the second half of the fiber the following day. Now this fiber is 100% Ramboulliet and it is absolutely lovely, but a fiber I’ve only used once or twice before. Spinning it on the fast flyer and at a very light weight were both new to me with this fiber, but I was feeling very good about how the singles turned out and I couldn’t wait to ply.

So after letting it rest overnight I got everything set up to ply. Let me set the stage of this for you. I really wanted to ply this (like yesterday), so I took my wheel outside where my kids wanted to play thinking I would set them up with some fun things to do in the yard so I could get the plying done lickedy split. They are awesome kids and I always do my best to communicate what our plan is — ie I’m going to do this spinning project and then I will play baseball, or I will do this art project with you now and then you will have time on your own so I can wrap up this spinning project.  Nine out of ten days we have a great balance of working on things together and separately, but this day they just weren’t having it. So I stopped to do some sunprints with them. I stopped to work on their art projects with them. I stopped to play baseball with them. It was just a whole lot of stop and go here. I’m not complaining since after all this is my job, but it did not go smoothly for any of us.

And my plied yarn… well, it was evidence of that. I don’t know if it was the stop & go of it all or my unfamiliarity with that Rambo fiber or some combination of the two, but it just was not great. 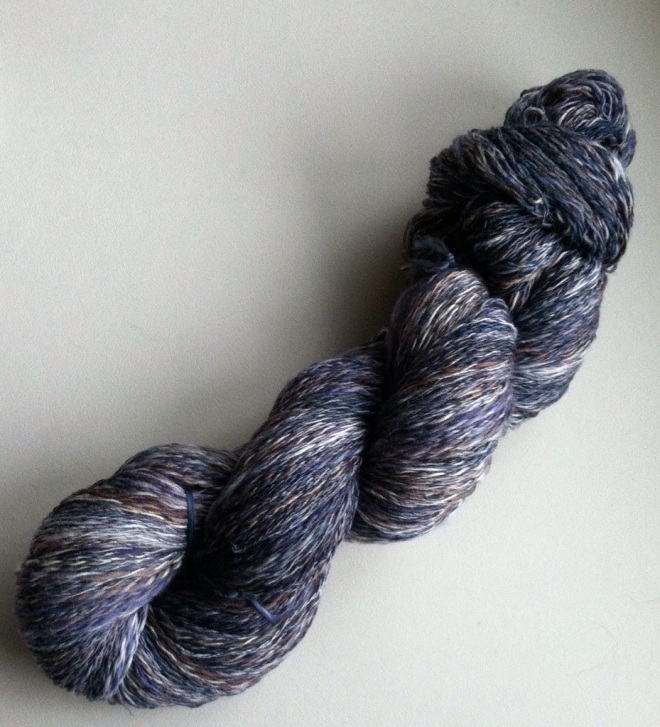 It wasn’t total trash, but it wasn’t really doing the colorway just either. It was just really under-twisted. 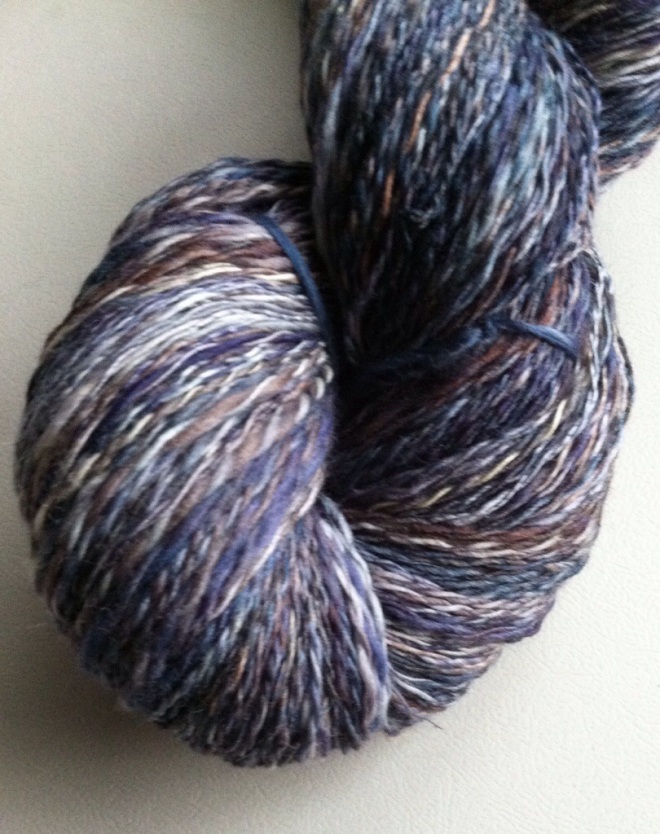 It was enough of a ‘meh’ that I didn’t even bother to get a clear photo.

That evening I posted up my work on my Tour de Fleece team pages and just mentioned that the plying on this skein was a little under-twisted and thus under-whelming. Shortly after some teammates from Team Cloudlover responded that I should try running it back through my wheel and adding some twist. I hadn’t considered trying to fix this issue, especially not via the simple avenue of running it back through my wheel. It just seemed too easy. I had never under-twisted a yarn before nor had I ever tried to correct any twist issues after plying. In addition, I was pretty skeptical that 1) it would work at all and 2) even if it did work, that I would have enough control over the twist I was adding to make the skein, you know, better. I was pretty sure I would just make a big mess. As I stared at the beautiful colors of this skein though I knew I just had to try. Who knew? Maybe fixing it was that simple. The following morning I put the skein on my swift and followed the instructions of my teammates — just attach my yarn to the leader and run it back through the wheel, adjusting the twist to my preference as I went. I took a big breath and off I went.

It seemed to be going surprisingly well. By the point I took this photo, my optimism was certainly growing. I really took a long time going back through it — making sure I got just the amount of twist I wanted, just hoping it would turn out as I intended.

When I skeined it I knew it had totally, 100% worked. I washed it and hung it out in the sun to dry it asap so I could share photos (it helped that it was a windy day, too).

I quite literally cannot believe the difference this simple, obvious action made. 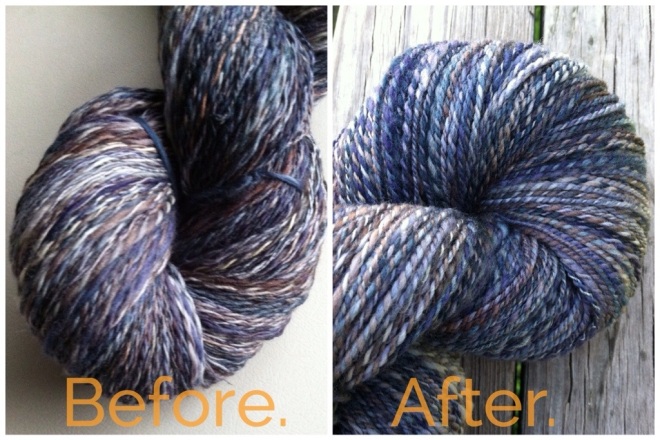 Seriously — look at this!

Thanks to this easy fix I now have 460yds of a simple 2ply with perfectly eloquent twist and great balance in a gorgeous colorway – I just could not be any happier.

I also could not have a better example of why I love the Tour de Fleece. As someone who really hasn’t had any formal spinning training combined with a rather severe lack of noting the obvious, I definitely have  benefit from some incredible advice during the Tour de Fleece. Who would think transforming an under-twisted ‘meh’ skein from one you like into one you  L  O  V  E  would be as simple & obvious as running it back through your wheel to add twist? That’s the magic of the Tour de Fleece — inspiration & encouragement from talented, knowledgeable spinners. Tips & tricks that’ll change your life. An excuse to spin your absolute favorite fibers.  And should you need it, friends to even point out the obvious & cheer you on as you try something new. I just don’t think spinning gets much better than this.