A few weeks ago I was walking this guy.

We were cruising along our normal route through town when a woman called to me from about a half block away,

“I have a vicious dog loose. You might want to avoid him so your dog doesn’t get hurt.”

“Right over there,” she pointed toward just the other side of the house.

Instantly, I made a 180degree turn and started booking it back home. For those who don’t know, my Moose is pretty darn important to me and like any dog owner innocently walking their dog the thought of  being attacked by some random loose vicious canine is the stuff of nightmares. Walking as fast as I could, I glanced over my shoulder to be sure we weren’t being chased. Somehow in doing so I ended up missing the sidewalk, stumbling on any uneven patch of grass, and just crashed nearly spread eagle onto the sidewalk. The fall was so unexpected that I actually hit the concrete with my ribs, closely followed by my hand & ultimately my cheek. Ow. The other hand held tight to the dog’s leash and, just to add insult to injury, the bag of dog waste. The latter was the last thing to hit the ground with a resounding splat just inches from my face.

As adults, most of us don’t fall much and it is shocking to say the least when it happens. I struggled to get to my feet quickly — of course, frantically looking for a frothing dog chasing us down — and I fleetingly thought about how I tell my kids to just get up when they fall, no big deal. Pushing myself off the concrete I thought, “What is wrong with you?! Falling is awful. And painful. Jeez! You. Are. So. Mean!” And then I thought about how klutzy I am and what the scene must have looked like to passers-by. At the time it was all pretty traumatic, but in retrospect the whole ordeal is pretty funny and it is actually hard to write about it without laughing. My flailing to the ground. Spastically trying to get up while mentally chastising myself for being too hard on my children all the while looking over my shoulder for an vicious hound that never materialized. Obviously the situation was not ideal, but I also think there was a fair bit of panicked overreaction on my part.

In any case, having bruised my ribs (or maybe it was just my pride) and with a hand and wrist tingling from the fall, I moved as fast as I could to get Moose and myself safely home. In the hustle, somewhere along the way I dropped my favorite blue handknit hat. It had been in my pocket and apparently somewhere in all the thrashing about it was ejected. Unfortunately I didn’t realize the loss until the following day and by that point, I was pretty sure even if I could recover the hat I wouldn’t really want to see how gross it was from being in the street all day and night. I resigned myself to having lost it. It’s not that I don’t have other hats, but this was my favorite, my go-to hat. Clearly I would have to replace it.

A week or so later on Spring Break my husband picked out some Claudia Hand Painted Fingering  — now renamed Claudia Hand Painted Yarn Addiction — in the Be My Valentine colorway. Just perfect for me with its pinks, golds, & slates, I bought it partly because he picked it out and that means it will always make me think of him and partly because he was right, it was perfect for me. I knew straight away that I wanted this yarn to be my new go-to hat — I was pretty sure I’d earned it, so I picked up two skeins to be absolutely positive that I’d have enough for any pattern I might decide to make. A blessing and a curse, having plenty of yarn I hemmed and hawed over a few patterns that I liked. Finally, I decided to attempt Fjord by Jenny Gordy. Written for worsted weight yarn, I opted to try to holding two strands together — luckily with two skeins this meant just knitting one strand from each skein together as I knit along.

I’m happy to say it worked just fine! I knit a smidge on the tight side, so I skimped just a little on some of the stockinette sections to be positive I wouldn’t run short on yardage. In the end, it wasn’t an issue as I had plenty of yarn, but on the bright side,  the hat turned out just little tighter than the photos and thus a perfect fit for my everyday hat. And an everyday go-to hat, it is… 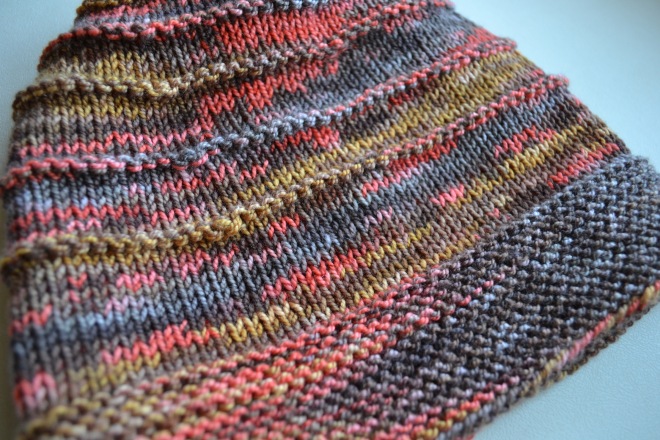 It may just be my new go-to hat pattern, too.

And now, this beautiful new go-to hat is forever linked to that fateful fall that with every recollection becomes more and more comical. Born from a unique moment saturated in a rare form of uncoordinated glory & made with new yarn selected by my darling husband who heard, “Be nice to me I fell down and it hurts” for two or three days, this hat will undoubtedly make me smile & hold a special place in my heart for years to come. Inspiration never ceases to follow the strangest paths. I wouldn’t have it any other way (although next time, I could do without the falling down).

For more information on this project, please feel free to visit my Ravelry project page here.